case of the month

The Importance & Utility of Pharmacodynamic Monitoring

Maggie is a 7-year-old female intact American Staffordshire Terrier that presented to the emergency service for worsening anemia, lethargy and hyporexia. Previous work-up at the primary care veterinarian showed a moderate anemia, in which she was prescribed doxycycline. Maggie is up to date on vaccines and preventatives. Due to decline in clinical status and no response to doxycycline therapy, she was referred in on emergency.

On presentation, Maggie's physical exam was unremarkable. CBC displayed a normocytic hypochromic anemia (16%) with a thrombocytosis. Chemistry was unremarkable with a mildly elevated CK. Clotting times were within normal limits. Slide agglutination was negative for macro and microagglutination. SNAP 4Dx and fecal flotation were negative. A comprehensive tick panel was sent to North Carolina State, which later returned negative for all pathogens. Thoracic radiographs were unremarkable. Abdominal radiographs displayed mild splenomegaly. Abdominal ultrasound displayed mild splenomegaly, but no other significant abnormalities. A reticulocyte count was performed and showed a non-regenerative anemia (absolute reticulocyte count of 8040/µL). At this time, a bone marrow biopsy and aspirate were performed. Cytology and histopathology were consistent with precursor-targeted immune-mediated anemia within the bone marrow with erythrophagocytosis appreciated. 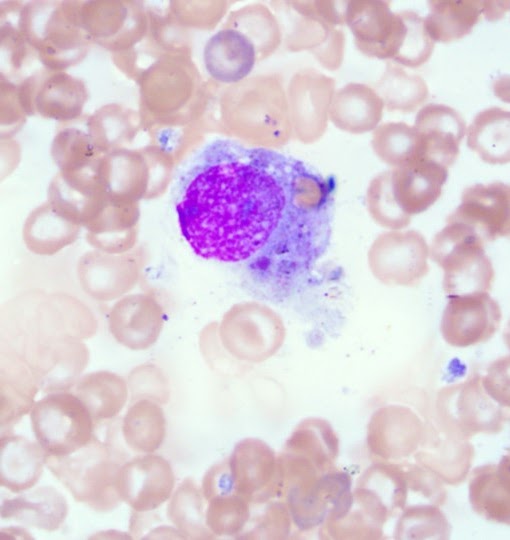 Maggie was initially started on immunosuppressive therapy with prednisone and mycophenolate at immunosuppressive dosages. Two weeks later, Maggie presented with worsening anemia, lethargy, vomiting, and hyporexia. Ondansetron had been added to her treatment regime in between rechecks but did not improve her nausea. Her PCV was 14%, and she was lethargic and tachycardic. She was transfused with DEA compatible blood, and her post-transfusion PCV was 24%. At this time, mycophenolate was discontinued, and cyclosporine was started (4.7 mg/kg PO BID). Clopidogrel and cerenia were also added to her treatment regime. Her GI signs resolved and she was discharged with a static PCV of 24%.

Maggie re-presented with a severe anemia (hct 12%). Reticulocyte count, although increased from her initial presentation, was consistent with a persistent nonregenerative anemia. She was crossmatched and transfused with compatible DEA blood without complication.

Pharmacodynamic monitoring was done and showed moderate suppression with the current cyclosporine therapy. At this time, she was also showing significant prednisone side effects. Based on the PD lab results and her significant steroid side effects, treatment adjustments included decreasing her prednisone dosage and increasing her cyclosporine dosage (up to 5.9 mg/kg PO BID).

A follow-up recheck with her primary veterinarian 2 weeks later showed a PCV of 30%, and according to the owner, Maggie was feeling great and back to her normal self, but still showing steroid side effects although reduced in severity. Due to her continued significant steroid side effects and positive response to the adjustments in therapy, her steroid therapy was tapered and discontinued over 3 weeks’ time, while maintaining the higher cyclosporine dosage. She continues to feel good and shows improvement in her PIMA.

Please join us at the VCCIS Special Interest Group at the ACVIM Forum!